Labour productivity can be considered the hourly output of an economy and represents labour’s contribution to economic activity and gross domestic product. It is driven by factors like human capital, investment, innovation, business, and policy environments as well as other global forces.

Gains in productivity can help Nova Scotia’s competitiveness in relation to other provinces and help moderate the impacts of an ageing and declining workforce in some areas of the province. Improvements in labour productivity can be influenced by both government and businesses.

The productivity figures that follow focus on business sector industries and excludes government and non-profit institutions.  For example, government-funded schools are excluded from the education sector.

Labour productivity is calculated by dividing the real value added by the estimated number of hours worked. Resource-producing provinces like Alberta, Saskatchewan, and Newfoundland and Labrador generate high amounts of real value-added due to resource and/or capital-intensive industries that require comparatively fewer hours worked. These provinces tend to have high levels of labour productivity and drive up the national average. 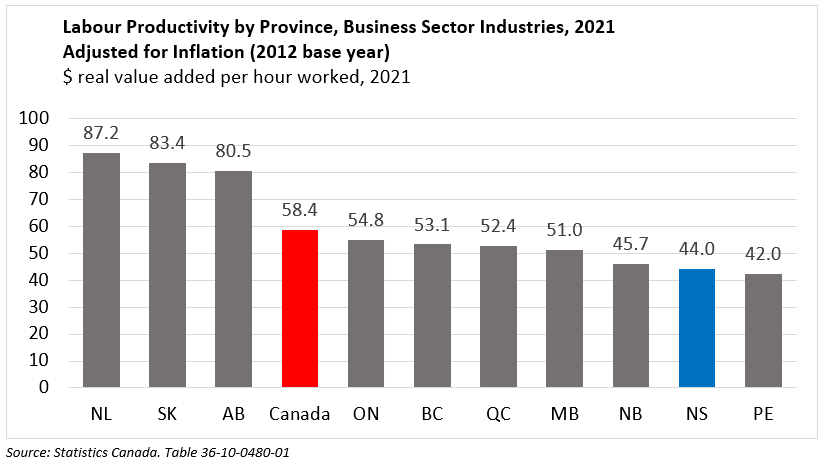 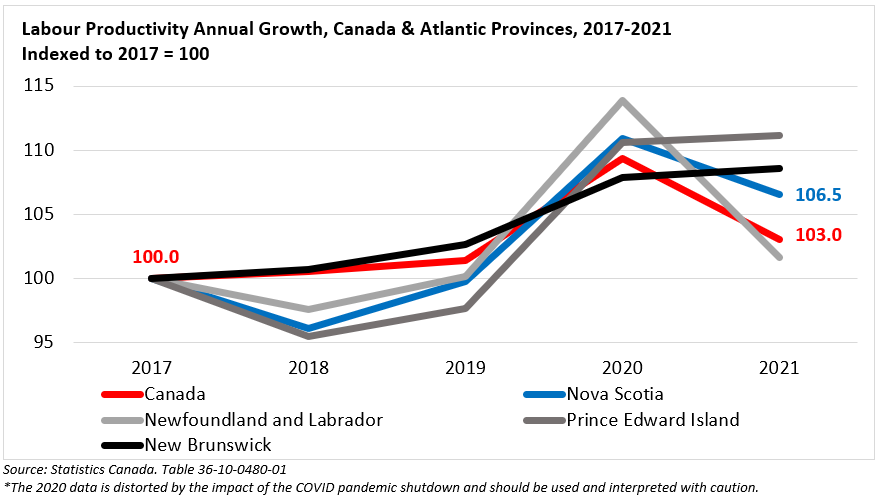 Atlantic Canada experienced labour productivity growth in 2017, before declining in 2018 and rebounding in 2019.

The year 2020 witnessed a surge in labour productivity across the country. However, this can mostly be attributed to the significant loss of low-productivity jobs to multiple COVID pandemic shutdowns. Total hours worked in 2020 dropped by 11% from the year before, disproportionally impacting low-wage jobs in accommodation & food services and wholesale & retail trades. Real business sector GDP fell less than the number of hours worked, raising labour productivity.

As public health restrictions eased in 2021, the number of hours worked increased significantly across many industries without as large an increase in real GDP. This resulted in a decline in productivity in 2021 for most provinces (the exceptions being Prince Edward Island and New Brunswick, which witnessed small gains).